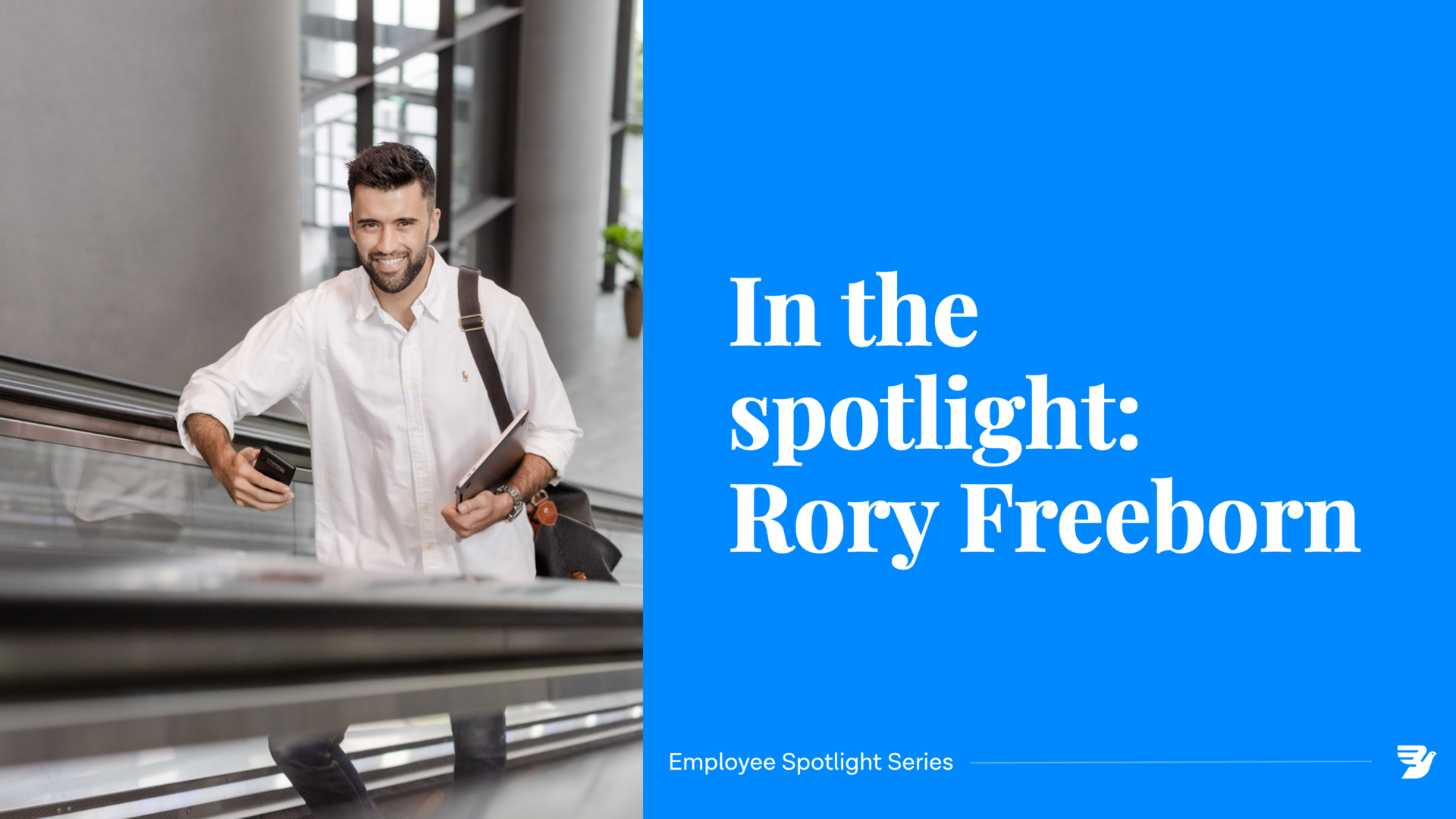 “Learning about other cultures by doing business with them is what I find most rewarding about my job. I love that I get to work with other global cultures that are completely removed from anything I'm used to. We see how these mega companies function, what their processes are, and learn a lot about our interim processes at the same time.”

In 2013, somewhere between California and Colombia, Rory Freeborn came to the realization that a career in tech was his destiny. He’d already spent a few years working in sales for tech companies, but had taken a year off to surf the Pacific coast and backpack from San Francisco to Bogota.

“During that trip, I’d had the idea that when I returned home I would let go of tech and move into something else,” Rory recalls. “But what I realized was that tech actually suited me really well. In 2014, I got swiftly back into it, and now I’m still in the same industry and doing the same type of role. It’s not because I didn’t explore other options or see what else is out there; it’s because I love the flexibility, the responsibility and the accountability that working in tech gives me.”

Originally from New Zealand, Rory spent four years working in business development in Sydney before he relocated to Singapore. It was there he heard of a four-person team at a start-up called MessageBird…

‍When you graduated from university, what was it about the tech industry that attracted you?

It’s not a legacy industry, like being a lawyer or an accountant. In tech, there’s no standard career path or prescribed certification that you need — but you can make an impact! It’s also a fast-paced environment where you have to get shit done or else you’ll fall behind. There’s no place for complacency in the workplace, and I really like that.

How and when did you get your start at MessageBird?

I knew Richard Dodds (MessageBird’s VP of Global Sales) because we went to the same high school and university. In 2018 when he moved to Singapore, he called me up; I was working at a competitor at the time and he asked me if I’d like to join the MessageBird flock. I agreed within about three seconds flat and we shook hands on it.

‍Three seconds is pretty fast! How did you know so quickly that you wanted to become a Bird?

I’d always kept tabs on MessageBird since the early days. I was aware of who they were and what they were doing. But the biggest draw card was being able to join a start-up.

What was appealing about the start-up environment?

It was a young team of four people back then, and I could immediately tell that we’d be awesome colleagues. Our first office was about four square meters, and we shared two desks between the four of us. If you needed to do something, you’d lean over to your neighbor and ask for help, or you had to learn how to do it yourself. There were no structures or processes — we just got it done and had a lot of fun along the way. And all of us are still with the company today, which is really special!

What have been the biggest changes and challenges since then?

In APAC, our team has grown from four people to 50! Going through a process of extreme growth in a short time span was an amazing challenge. We’ve had to manage people’s expectations — and assimilate them into one common culture — as they all came from different companies. It’s been eye-opening and very rewarding.

‍What’s been your favorite project at MessageBird?

I closed a deal with a company called DiDi, which is a Chinese ride-hailing company that’s bigger than Uber. That project was fun because we were venturing into China, which was uncharted territory for MessageBird at the time (and I’d also never been to China!). The whole process from start-to-end was incredible. We were successful with DiDi and still are to this day; we’ve helped them with their launch into LatAm and other markets worldwide.

“Compared to other jobs, MessageBird is so diverse and yet so inclusive. Sometimes I'm blown away by the differences in our backgrounds, hobbies and life experiences, but at the end of the day, we're all Birds.”

‍What’s the biggest mistake you’ve made, and how did you deal with it?

‍We were meant to hand in a RFP for a huge deal, and it had to be submitted at a certain time. I left it to the last minute and then there was a slight technical issue, so it was about three minutes late. I got a call from our procurement team saying, “Sorry, it’s too late; your submission was rejected and there’s nothing we can do about it.”

I immediately had a panic attack! I walked to my boss’ office and said, “I’ve made a huge mistake and I need help ASAP.” We jumped into action for mission control; I ended up flying to Beijing to calm the situation. We got the RFP accepted in the end, but in the moment, I’d thought months of hard work were undone by a silly mistake. Luckily we got through it, but to this day, I will never cut it down to the wire like that again!

I love that there's no room for complacency. I’ve played sports all my life and I’ve always strived to be in the “A team.” At MessageBird, our culture fits that mentality. We know we’re one of the world’s leading tech companies and we all want to win.

“At MessageBird we have a collective mindset that we all need to perform if we’re going to be successful. There’s no room for turning up and doing the bare minimum — to some that might sound ruthless, but that’s not what we’re about. We understand the collective goal and everyone is pulling in the same direction.”

What do you find most rewarding about your career?

Looking back to where we were … and then looking at where we are now. Understanding how far we’ve come in just a few years is absolutely mind-blowing.

When I talk to my colleagues who have been here for a long time, we reminisce about the early days — the processes we tried to implement and how we went about trying to sign deals. Then we look at where we are today and see the massive growth we’ve had. To know you had a hand in helping all of that — to know you directly impacted that growth — is super rewarding.

How do you take advantage of the Work Anywhere policy?

I think it makes me a lot healthier! My role typically lends itself to a lot of travel, which can be detrimental to physical and mental health. Normally we sit on planes overnight, then head straight to appointments, then jump from meeting to meeting all day. We get a lot of business done, but it’s draining. Now I have a healthier lifestyle — I like the freedom to do my work when it suits me. With the 80/20 rule, I can plan to go cycling, go to the gym or see my friends at times when I usually wouldn’t.

What is your message to anyone thinking about starting a career in tech?

Be bold enough to share your ideas, be prescriptive, learn as much as you can and become an expert in what you do. Know if something’s not your path — in tech, you don’t lose anything by side-stepping into other roles that interest you.