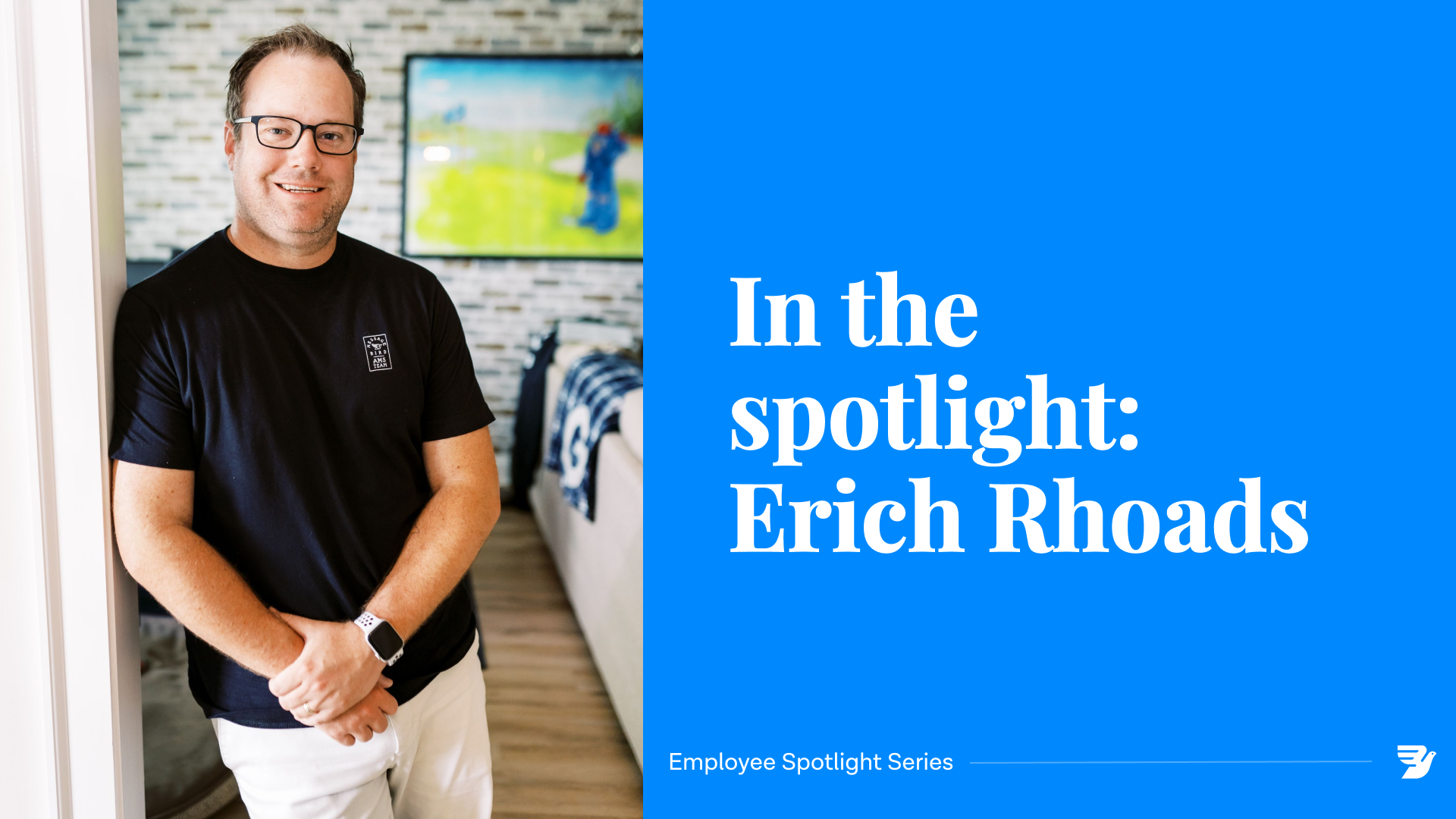 “MessageBird’s motto is ‘get shit done’ and I love that attitude. Everyone here is very open, upfront and helpful. It’s not about titles and it’s not about hierarchy — it’s about getting the job done.”

People say that a great teacher is impossible to forget, and that couldn’t be more true for Erich Rhoads. If it weren’t for a professor at the University of Alabama, Erich might not have pursued — let alone considered — a career in tech sales.

“While I was in grad school, I wanted to become a consultant and work for one of the ‘big four’ consulting firms,” Erich recalls. “One day, my international business professor pulled me aside and said, ‘I think you’d do really well in sales — you have the personality, you have the drive and you can think on the fly.’ So, I took it to heart and went for it.”

Erich says that after graduation he got a job in sales and was able to develop relationships, create his own schedule and work on his own terms. Plus, he put in less hours but made a higher salary than his classmates who had pursued consulting.

Now nearly 10 years later, Erich has experienced sales roles within companies from startup to enterprise — though it was by chance that he became a Bird. In March 2021, Erich was working for the data platform Hull when it was acquired by MessageBird. He’s now a Sales Manager for our fast-growing North American business and says he “couldn’t be more excited” for the journey ahead.

It was a really positive experience — everyone at MessageBird was super welcoming! I’ve been through acquisitions before, on a smaller scale, but then I’d had the feeling that we were secondhand or left out. Now, it was all really smooth; we were immediately jumping on calls, meeting each other, learning about the products, and talking about how we’ll work together. When I was in this position before I might have wanted to leave, but now I totally see the value of staying, and I’m excited to continue being a Bird!‍

How have your first weeks at MessageBird been?

We hit the ground running! We’re having a lot of Slack conversations, learning about the products and our competition, and doing a lot of research. We’re getting ramped up for what’s going to be a really exciting journey ahead — especially as MessageBird breaks into the North American market.

How did you end up working at Hull?

I previously worked at start-ups and then I got a job at Dell. I realized that I like smaller companies. You get to wear multiple hats and drive the growth with a small team. Culture is also a big thing for me, and I left “corporate America” because there was generally a lack of culture. When I joined Hull in early 2019, I was the only person doing sales! It was stressful at times, but also a lot of fun.

‍How do you typically structure your work day?

Because I’m in Atlanta, Georgia, I have an early start time so that I overlap more with the team in Europe — especially since I work with a lot of people in London and with the Pusher team in particular. I also take advantage of the 80/20 rule! I like to be behind my desk around 6:00 a.m. my time, then I usually wrap up around 2:00 or 3:00 p.m. and if the weather is good, I’ll grab my golf clubs and head out on the green.

What gets you out of bed in the morning?

I love tackling challenges — if it’s not challenging, it’s not fun. Good thing tech sales is always full of challenges!

What do you find most rewarding about your career?

It sounds cheesy, but I love to help people with their issues. Nothing makes me prouder than hearing a client say, “Wow your product really is kick-ass!” or “It’s really been a game-changer for our business.” Customer and client success bring me a lot of happiness.

"Tech is taking over the world! The industry moves quickly and is ever-changing. It’s also super rewarding. If you’re interested to get into it, there are opportunities in anything that you’re looking to do — be it sales, engineering, analytics, marketing, and more.”

‍What are your thoughts on MessageBird’s Work Anywhere policy?

It’s nice to be able to move to the place that best fits your lifestyle. Right now we’re in Atlanta because my wife is tied here for her job in healthcare, but if she’d want to move elsewhere in the future, then my job is more flexible and I can follow her. Having this ability is really eye-opening and it reduces my stress levels. Plus, I don’t have to commute!

What’s the biggest mistake you’ve made in your career, and how did you deal with it?

My first job. Looking back now, I had no idea what I was doing! But it was a huge learning process, and now I don’t see it as a mistake. You learn more from messing up than you do from constantly succeeding.‍

If you weren’t working in tech sales, what would you be doing? ‍

I’d probably be in consulting or analytics. I studied math and econometrics, so I’m a numbers guy. And I love working with people!‍

‍What would be your message to anyone thinking about starting a career in tech?

Do it! You get to see the coolest, latest and greatest stuff — what’s new and what’s hot. I also don’t like to work with an old fashioned management team and idealisms. Tech moves fast and I’ve already learned so much! I’ve done IT security with Dell, worked with a small marketing firm, done data integration at Hull, and now I’m learning omnichannel communication at MessageBird. The experiences I’ve had are awesome.

What do you like most about the MessageBird culture?

I love the motto “get shit done.” I love that attitude. People are very upfront in work and everyone I talk to brings a different personality to the game. I can’t wait for travel to open up again, so I can meet everybody in person!‍

What are three words you’d use to describe MessageBird?