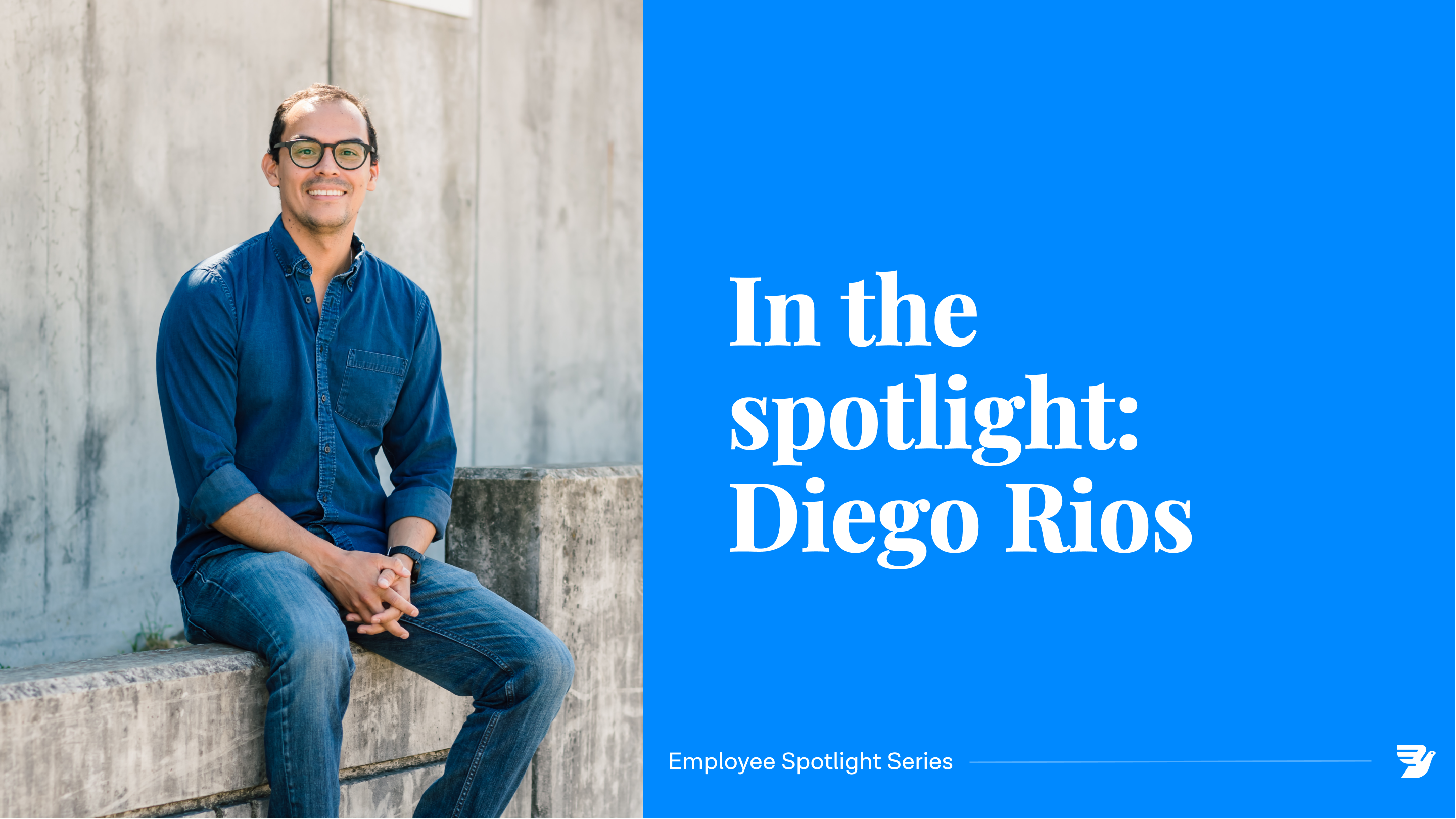 “We’ve all been through the experience of trying to contact a business, and then waiting for hours on hold. You might call, you might email, you might text — and it’s always a different customer service representative who responds. MessageBird is changing that.”

It’s an unconventional story, but it was a blog post that led to Diego Rios landing his job in Product Marketing at MessageBird.

Diego says he hadn’t heard about the company, but after a friend suggested he check out MessageBird, he started to research its omnichannel platform and automation. “I immediately started to get a ton of ads from MessageBird on Facebook,” Diego recalls. “I wasn’t really planning to look for a new job, but I thought it was a cool company doing cool things.”

He considered applying through traditional channels, but instead, he decided to get creative. “I thought about how to improve MessageBird’s ads and marketing, and I wrote a Medium post on it to highlight some of the areas where I thought they could do better,” he recalls. “I published it on LinkedIn and Medium, and used the same tags that MessageBird was using. I also reached out to some recruiters, and at the same time, the post caught the attention of some people in-house. Before I knew it I was in rounds of interviews!”

Since early 2021, Diego has been simultaneously navigating his role at MessageBird with another new job: fatherhood. While balancing the two has been a whirlwind (on top of a global pandemic, no less), he says he’s thankful for MessageBird’s environment of flexibility, freedom and independence.

Why did you want to join MessageBird?

I’m attracted to MessageBird’s play on omnichannel. Most of our competitors are focused on just one channel — just WhatsApp, just SMS, just Email. I think the play on centralizing things into one platform and one software system is a great approach.

What has been your favorite part of your MessageBird journey so far?

Meeting new people! I spent a year stuck in our apartment during COVID-19, so we never really met anyone for work or socially. I’ve probably met more people virtually in the last month than I did in all of 2020! It’s also really cool to meet people from everywhere — this week alone I’ve had calls with Birds in Singapore, L.A., San Francisco, Amsterdam, Spain and Colombia.

The flexibility at MessageBird has really helped. I think it would be really hard for me to have a strict “9 to 6” schedule and have to physically be in an office all day. Now it’s much easier to organize schedules, and I can also help to take care of my son and spend time with him throughout the day.

‍How does a typical day “as a Bird” look for you?

Usually I wake up at 5:30 or 6:00 a.m. because that’s when my son wakes up. I try to start work early, and first take 15 minutes to plan my day. I generally have meetings in the morning, because that’s when I overlap with Europe, and then I keep my afternoons free for my own work. Between 3:00 and 4:00 p.m. I take a break to take care of my son, then I sometimes go back online around 8:00 p.m. to sync with APAC.

What keeps you coming back to work each day?

I like the challenge: how do we build content to position MessageBird as the number one company in omnichannel communications?

What do you like most about the MessageBird culture?

It gives you a lot of independence to push things forward!

“If you want to apply for a position with us, just go for it. It doesn’t matter if you’re in Latin America, Africa, Asia or somewhere in between and totally remote — we’re a global company and a Work Anywhere company!”

How do you take advantage of the Work Anywhere policy?‍

When I was first hired we were living in Vancouver, then we had our son and with my wife we moved to upstate New York. We didn’t have to change anything for work, and it was super easy to coordinate with HR. I’m now planning a trip to Guatemala, so I can work from there for a week plus see my friends and family, who I haven’t seen for over a year! It’s the best of both worlds.

What has been your career path so far? ‍

My first jobs were in marketing in mobile banking and mobile health in the USA, then I moved back to my motherland of Guatemala. I was on an entrepreneurial journey; we started a business selling cell phone cases made with 3D printers, and to market the business, I learned about Facebook ads.

People started to ask me for help with the ads, so we created a course. That accidentally led to us having a consulting business working with real estate developers in marketing sales and automation. Then, three years ago, I started a blog where I would help people get Facebook Blueprint certified. We have 25,000 members in our Facebook group, and 8,000 people have downloaded the study guide. I realized that I love marketing!

I never thought of myself as a creative person, but all of my previous steps made me realize that marketing has a creative side but also a scientific side. I find it super interesting — there’s a whole new field of marketing that uses data, numbers and technology to make better decisions and improve your sales.

For you, what’s been the difference between working at a startup versus a more established company like MessageBird?

The scale of things and the impact you can have. Previously I’ve managed $20,000 in a month, and now we could spend that in a week. I’ve got from budgets of a few million to a hundred million. At the same time, we still have so much to build here. I like that I can start projects from scratch and figure things out. It’s a huge challenge, but it’s also cool that we can have a lot of impact!

What are three words you’d use to describe MessageBird?

What does “messy in a good way” mean?!

There’s so much going on and it can be hard to know who’s working on what. But I like that! I like to figure out how we can communicate better, improve metrics, build a strategy, develop marketing infrastructure, and align on the same path. I feel comfortable in that “mess”!

What’s been your favorite project so far at MessageBird?

In a short amount of time we developed a plan, had good collaboration, and everyone was pushing it super quickly for great results.

What would be your message to anyone thinking about starting a career in tech?

Be ready to adapt. Be ready to try, fail and move on. It’s a really fast-paced environment, which means there are a lot of changes and a lot of unknowns. You have to be OK with uncertainty, to make decisions with the information that you have, and to adapt to what’s needed at the time.